The political circus has ended, the campaign tent is now folded. Americans appear to have elected Donald Trump as their new President. President Trump will lead an economy with deep problems and mixed prospects. The narrow victory for President Trump reveals a divided nation.

Many American workers feel that their ‘best days’ are actually in the past rather than future. Low wages, the loss of full-time skilled jobs with only brief and rare part-time work opportunities available, expensive education and health care costs for families – these challenges have faded the American dream.

While the US has etched out a modest economic recovery since the depth of the GFC in 2008, there have been more twists and turns on the journey than Route 66.   Event risks such as the US credit rating downgrade, Federal Government shutdowns with a polarised Congress, as well as the sharp “fiscal cliff” budget tightening, and strong US dollar over recent years, have all restrained US economic growth.

Hence the new President faces considerable hurdles over the next four years to overcome. The political landscape has its own rocky terrain that needs to be negotiated.

Has polarised US politics come to an end? Can President Trump work with a  Republican Congress?

Republicans have retained control of both the Senate and the House of Representatives. This Republican-majority Congress has generated acrimony and gridlock over the past six years with the current Democrat President Obama.

With President Trump, there now seems more scope for compromise between Congress and the White House.

The current “State of the Union” shows US economic growth has averaged 1.7% in 2016. This is well below the 3% average growth pace prior to the GFC. The US’s corporate sector appears reluctant to invest even with low interest rates. This may be due to better opportunities elsewhere as well as the political risk in Washington DC. For all the advanced labour skills and technology available, US productivity has been also been disappointingly flat over recent years.

America’s unemployment has now fallen to 4.9% which is similar to pre-GFC experience (chart Black line). Yet this masks the scale of under-employment with part-time workers wanting more hours. The US underemployment rate is now 9.7% (chart red line) but is 1% above its average in the decade prior to 2007. So the US labour market has yet to completely heal the wounds inflicted by the GFC. 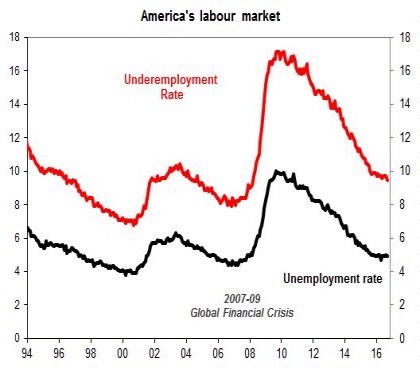 US household disposable income has also barely increased over the past 16 years. There are also the secular challenges of an aging population and high debt burdens.  So the average American is questioning whether the country is an economic superpower for only the privileged few rather than the majority.

President Trump’s platform is a remarkable combination of the traditional Republican ‘lower taxes and smaller government’ pledges combined with more confrontational commentary on globalisation and immigration.

President Trump has made numerous bold spending promises based on the financial sector and private enterprises funding. President Trump has pledged a US $1 trillion rebuilding program for infrastructure based on “private investment funding”. This is certainly ambitious, but Mr Trump is convinced that US economic growth can accelerate from the current 2% pace to “go higher than 4%” or even “go to 5% or 6%”.

The most concerning element of Trump’s rhetoric is his antagonism towards international trade and immigration. Trump has condemned globalisation as “moving our jobs, our wealth and our factories to Mexico and overseas.” There is a confronting protectionist element to these pronouncements. The US under this new President may be considering raising import tariffs and preferential treatment for US companies to preserve domestic jobs. Given that some Congressional Republicans favour global trade and an open US economy, President Trump is likely to find some considerable opposition to his policies within his own party.

What is the potential market impact of a Trump presidency?

A Trump win has resulted in dramatic financial market turbulence in the short term, given the candidate’s controversial announcements on international trade. At the time of writing, Mexico’s exchange rate has already fallen by -10% against the US Dollar given the prospect of a renegotiation of the North American Free Trade Agreement (NAFTA).

President Trump’s medium-term impact on Wall Street is a strange mix of positives (lower corporate taxes) and negatives (higher US dollar, higher US interest rates) that could prove either favourable or painful for Wall Street. However the immediate response has been negative (S&P 500 futures down by -5%) given the unexpected victory compared to market and poll predictions.

The assertive Trump budget stimulus program (lower taxes, larger infrastructure spend) should  place upward pressure on US Government bond yields by raising concerns over the US budget deficit. However given the initial negative impact on the US  share market, US bond yields have rallied as a defensive response.

As with all event shocks, it will take some time for investment markets to work through the impacts on the economy and corporate earnings. We saw as recently as June this year the market reacts quickly, falling sharply following the surprise Brexit outcome. Then within a few weeks most of these losses were recovered. While we can’t be certain what the future holds, knee-jerk reactions to events can be costly to wealth accumulation.

This communication is directed to and prepared for Australian residents only.