In a surprise outcome, Britain has decided to LEAVE the European Union. While the reaction and full implications of the referendum will continue to evolve, we answer some of the initial questions investors are asking right now.

1. At this early stage, what will be the impact for Australian investors?

Expect market volatility to be high over the coming days, weeks and possibly months. The decision to leave has triggered a new uncertain environment and markets will need to understand the impact this vote will have on Britain, and the implications for the European Union (EU) more broadly.  This will take time and hence market volatility will probably be high.

The severe share and currency market reactions following the result suggest that joining the selling exodus may be a little too late. The history of such events shows that they can provide buying opportunities when others are panicking.  However, the outlook is so uncertain that we would suggest remaining cautious for the present until the picture is clearer.

2. Why is Britain’s decision to leave the EU so surprising to financial markets?

Financial markets had favoured Britain would remain in the EU. While there had been considerable swings in the polls in the final weeks of the campaign, on the eve of the vote, the average poll measure suggested a narrow victory to the “remain” side. The Financial Times ‘poll of polls’ on 22 June showed a narrow poll lead to “remain” but with an “undecided” component of 8%.

There are a wide range of views on this. The consensus generally suggests Britain’s economic growth will struggle, because it’s significantly integrated into the European economy.

Britain relies on Europe for 48% of Foreign Direct Investment and nearly 45% of exports. So the decision to exit could have a dramatic impact on Britain’s prosperity.

The average estimate of seven long-term forecasters is that the exit will lower Britain’s economic growth by a net of -3.8 % over the next 15 years, to 2030.

% change in GDP compared with remaining in the EU, assuming trade based on WTO rules 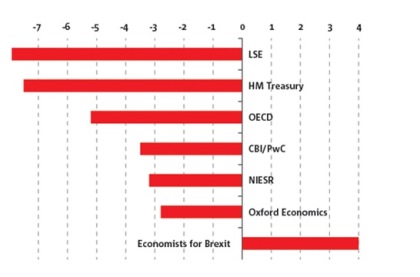 The economic debate is whether this loss to Britain’s GDP prospects occurs in the short term, with Britain immediately slipping into recession, or over a long period. The Bank of England and UK Treasury have warned about the possibility of a recession.

However there are two key reasons why a British recession is a possibility rather than the most likely outcome:

If the economic  pain of a -4% loss  to GDP  is spread over the next 15 years , this  would imply that Britain’s long term economic growth would be around -0.25% lower per year. Given Britain’s economic growth is travelling at a 2% annual pace, this is a more modest but manageable negative impact.

So Britain appears more likely to experience slower growth but not an immediate recession, given the negative impact should be spread over a longer period.

4. What’s the likely impact on the Global economy?

Britain accounts for about 2.7 % of Global GDP and is much smaller than the US and China (around 16% each).

If Britain’s economic activity fell by -4% in the worst case scenario, this would take only -0.1% off global economic growth. Given that global growth is currently running at a +3% annual pace, this does not automatically lead to a global recession or a global financial crisis, as seen in 2008.

The more immediate risks to global economic prospects actually come from China’s economic slowdown, weakness in emerging markets such as Brazil and Russia, and the prospect of the US Federal Reserve raising interest rates.

5. What does this outcome mean for European and British investors in the short term?

6. What next? A possible trajectory of events

The information in this communication may constitute general advice. It has been prepared without taking account of individual objectives, financial situation or needs and because of that you should, before acting on the advice, consider the appropriateness of the advice having regard to your personal objectives, financial situation and needs. MLC believes that the information contained in this communication is correct and that any estimates, opinions, conclusions or recommendations are reasonably held or made as at the time of compilation. However, no warranty is made as to the accuracy or reliability of this information (which may change without notice). MLC relies on third parties to provide certain information and is not responsible for its accuracy, nor is MLC liable for any loss arising from a person relying on information provided by third parties.

This information is directed and prepared for Australian residents only.